It’s my first day here. No more airports (for the time being). No more travel purgatory, that in between place after you’ve started the journey, but before the destination is reached. I know the ‘getting there is half the fun’ thing, but 24 hours of economy seating and fluorescent hallways is not going to be the highlight of THIS journey. Although I will say that meeting Bobby and Stuart (my new Scots friends) made that part of it far more tolerable.
It took a while to get me out of the hotel room. I decided I was going to start the day at the Chiang Mai Zoo. I thought this would be an easy day given the inevitable jet lag. I have no jet lag. I don’t know why. I am a biological wonder, I guess. Whatever, I’ll take it. I wish I could say I’m fearless. I am not. So, fear kept me in. Not for long, though. I procrastinated for less than an hour. Glad to get that behind me. Now, on with the day!
I figured out how to get to the zoo. I had read that this a pretty good zoo, as far as zoos go. My opinion of zoos has changed over the years. When I was younger I was skeptical of zoos (not as a child… What child doesn’t love the zoo.). I thought they were cruel. That animals should be in their natural habitat and who are we to cage these animals for our own enjoyment. Later, I went on to receive a bachelor degree in biology concentrating on wildlife conservation. I know now that zoos can be a place to help save those animals in danger of low population numbers, threatened by loss of habitat or physical danger of poaching, etc. Zoos, if well maintained and funded, can be a place of education for the public and aid in the genetic research for mating programs to keep a species sustainable. With this in mind I wanted to check this zoo out. I had heard about their feature exhibit – the Giant Pandas. They currently (and only for a couple more months) have the result of a successful mating program involving Chuang Chuang, the male, and Lin-Hui, the female. Lin-Ping was born almost three years ago and lives in the habitat next to her mother. I could have spent hours at this exhibit. There was only a small group of us (maybe because it was 10am on a Wednesday) and the animals were active! It was amazing to watch them eat, play… Do whatever Pandas do. This is absolutely the exhibit that is the draw here and it pleases me that they are using it to better the species. Overall, the zoo is great; well laid out, fairly well marked, clean, improvements going on. I know this sounds like an odd review of a zoo, but part of me is still skeptical and a zoo needs to prove their intentions to me. I only made it through half if it..it’s pretty big, but I hit the highlights and attractions I tend towards. The big cats, mainly.
A little lunch and on to the National Museum. 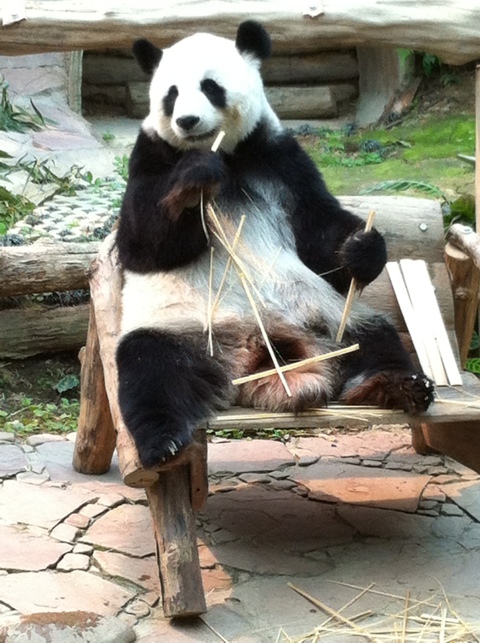